We Are Committed to Meeting our Client’s Needs 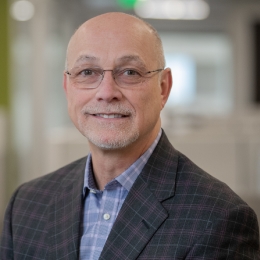 Don Sicard is FCCS's Vice President of Risk Management and Insurance, a role in which he manages both claims management and risk management teams. He came to FCCS in late 2014 as a result of company leadership’s desire to develop succession planning. Wanting to secure someone who knew how the system worked, how talent was managed, and how to network, Sicard, a 35-year veteran of the business — 20 years in leadership roles — surfaced as the natural choice.

“A leader should set the example and get out of the way and let the team prosper,” Sicard said of his work ethic.

In fact, in the short time Sicard has been part of the FCCS team, he spearheaded the reinsuring of risk to the commercial market with Farm Credit. With cost-effectiveness in mind, they shifted the risk off of captive markets and onto the global reinsurance marketplace.

“I’ve been a risk-taker in my life,” he said, but not without the promise of reward. Sicard grew up in rural Connecticut but has lived and traveled all over the world. He put himself through college, built a career, and fostered a strong, 33-year marriage through perseverance and the same calculated risks that have made him a professional success. He remains passionate, however, about ensuring everyone has a shot, and he commits to that through his example and actions.

“I like allowing people to grow,” he said of his leadership style, “to spread their wings and fly, so to speak.”

Sicard is an active mentor and guest speaker at University of Denver’s Daniels School of Business where he lectures undergraduate and graduate students on topics such as risk management. He relishes new challenges — an attitude fueling his hobbies of distance running, piano playing and the exploration of developing countries. Success is good, he said, but failure is always a better teacher. Sicard credits his wife, and a certain motto of which she is fond, for influencing both his work and life: “When we know better, we do better,” she often says.

Prior to joining FCC S, Sicard was the senior vice president and chief marketing officer at Hub International Insurance Services in Denver. Preceding that role, he worked at Aon Reed Stenhouse, Moreton & Company, Palmer & Cay, Marsh & McLennan and others. Sicard is a graduate of the University of Denver with a Bachelor’s degree in business administration. He lives in Denver with his wife and their two dogs.

Sign Up for Our Newsletter for the Latest Articles, Insights & Events